Our costs went down 80-90%, and our quality’s going up. We really couldn’t do it without ABM and Kason, because I think they intuitively understand what it means to dry any kind of organic product. It’s a win/win for us. 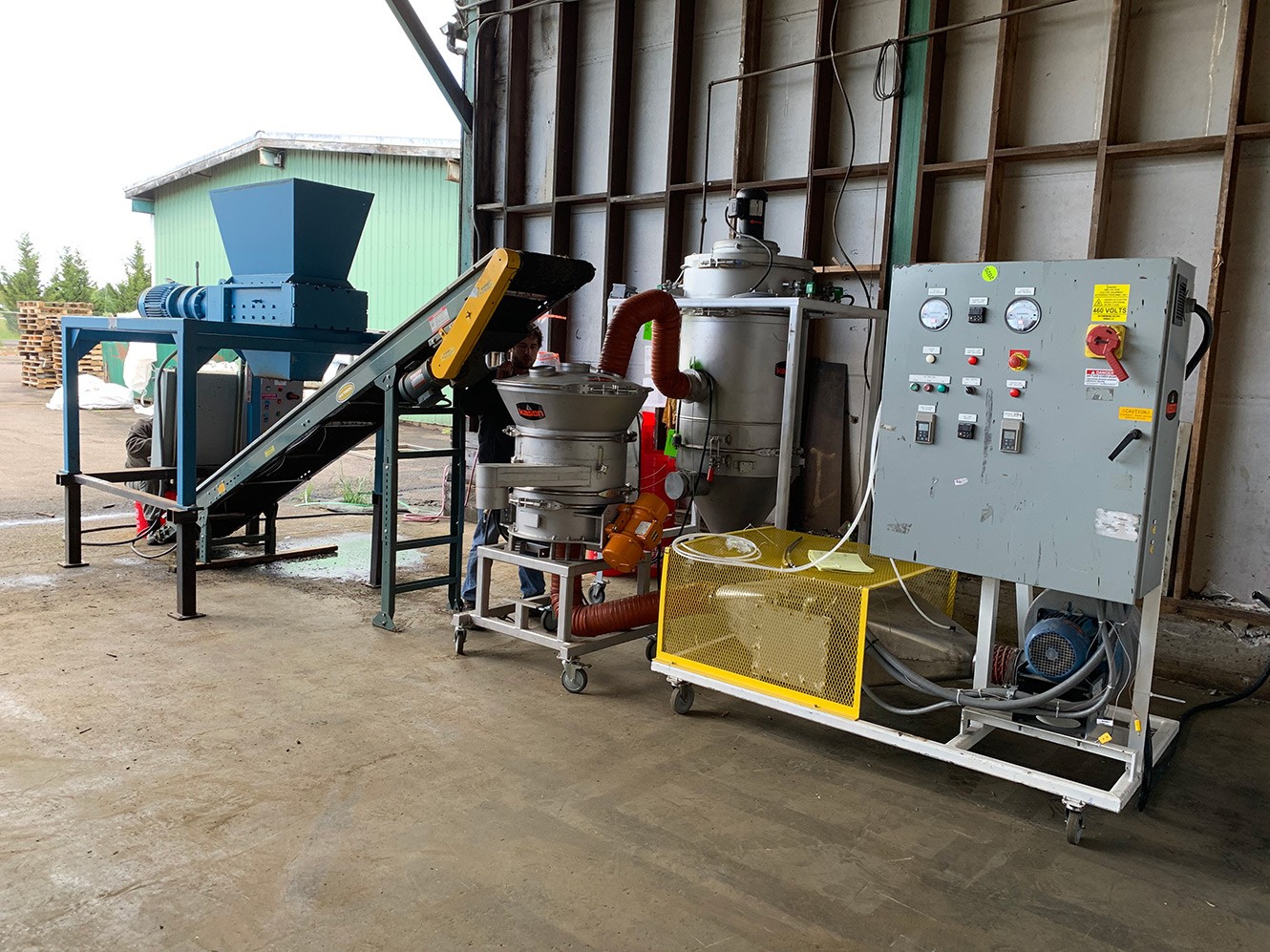 Two years ago, Billy Tosheff, a local hemp and vegetable farmer in Oregon, sensed that cannabis presented an opportunity to both help people and generate income.

But along the way, Tosheff learned that his company, Columbia Hemp Trading Co. (CHTC) was dealing with a crop that presented tremendous new challenges for getting it out of the field and into distribution. Although Tosheff and his new colleagues had experience in organic farming and processing, they rapidly found that cannabis was unlike other biomass products. To ramp-up production, they needed to address the challenges specific to cannabis drying and processing in an environment where there was no industry background and experience.

As his volumes increased, along with his understanding of the complexities of hemp drying, CHTC turned to a long-time processing partner, ABM Equipment of Vancouver, WA, for help. If the business was going to take off in what was becoming a highly competitive field, it needed a system capable of better yields, higher throughput, and massive cost reduction.

The call led to a unique three-way partnership to create a new drying system – CHTC, ABM Equipment, and Kason. Today, with patent-pending technology behind it, CHTC has deployed an integrated continuous processing system that has led to dramatic performance and cost advantages while finally giving CHTC a platform to scale to full-acreage crop volumes.

The new solution has reduced costs by more than 80-90%, while preserving the terpene content, color, and aroma of the finished product. The process has also solved challenges in the drying process, resulting in consistent 10% moisture content of the processed biomass at ambient temperature.

Hemp is like no other biomass product; it’s tough, it’s sticky, it needs delicate separation and processing, and it has to be dried within a week or it decomposes.

“We decided to do what seems like the most difficult processing job there is: take truckloads of hemp that often come in all at once, by inventing new systems that don’t tend to damage the very crop the way existing equipment seemed to be doing,” said Jacob Crabtree, CEO of Columbia Hemp Trading Company. Many systems being used in the field were struggling, he said, because while they may have been successful when developed for other industries, the tough hemp crop presented new drying and handling problems they weren’t engineered to solve.

If it’s over-heated, he said, the product instantly becomes worthless. “From last year, 2019, I still have a million and a half pounds of biomass sitting around that falls way below the threshold for extraction,” says Crabtree.

CHTC initially used tumbler drying equipment, but that presented three challenges to be eliminated in order to get to large-scale production.

First, the process was so labor-intensive that it was clearly not sustainable in a market where prices have dropped 90%. Secondly, the moisture content rose when they moved out of the machine back to ambient temperature. Finally, the extreme temperatures used in drum (tumbler) dryers were burning the CBD and discoloring the hemp.

“The target we’re going for is a 10% moisture content, still green in color, and retention of cannabinoids. What that means is that if it comes in at 8%, it’s leaving at, let’s say, 7.8% CBD content. With our other systems, we’re getting some browning of the material. Now with the new 2-stage Kason drying system, it’s looking just as green and natural as when it came in, with that retention of cannabinoids,” said Crabtree.

Kason filed for patent protection on the newly engineered system in 2020 based around a 2-stage drying methodology developed with ABM Equipment. Rather than using extreme heat that is destructive to the hemp product itself, the patent outlines the use of a high-throughput fluid bed dryer – Kason’s VIBRO-BED system – that eliminates the common problem of burning hemp found in other drum- (tumbler) based equipment.

The new drying system utilizes various technologies for conveyance, particle size reduction, and sorting of the hemp biomass, in addition to a fluid bed drying technology. By controlling the entire process, the ABM Equipment/Kason solution is able to achieve results superior to belt or tumbler dryers.

Early-on, when the CHTC team realized the particular difficulties they were facing with a hemp crop, they turned to ABM Equipment because of its combination of high-quality equipment, biomass processing expertise, and its integration experience in customizing an end-to-end solution and tweak it until the results met Columbia’s standards.

“The biggest learning curve I had was understanding how organic material dries,” said Crabtree. “When I mentioned to Jeff Walling of ABM our objective of getting from 75% moisture content down to 10% and the problems we’d had, he knew intuitively what we were trying to accomplish. I think ABM has seen this along a lot of food products over the years, so they knew how to design a cannabis-purposed drying and separation system.”

The ABM team together with CHTC – alongside several farmers – tested the system on a variety of crop variations to perfect the system.

“The entire industry is so new that even the growers weren’t consistent in how they had been harvesting and drying,” recalled Billy Tosheff, CHTC’s founder. “They were asking me how to tell when the cannabis plant was ready to harvest, and nobody was coming in the same way twice. That quickly demonstrated the inefficiency of the process.”

If Tosheff’s mission was to help the farmers get the most yield from their crops amid rapidly dropping cannabis prices and rising competition, he knew it was critical to work with an integrator like ABM Equipment that could bring his company decades of process and biomass experience. 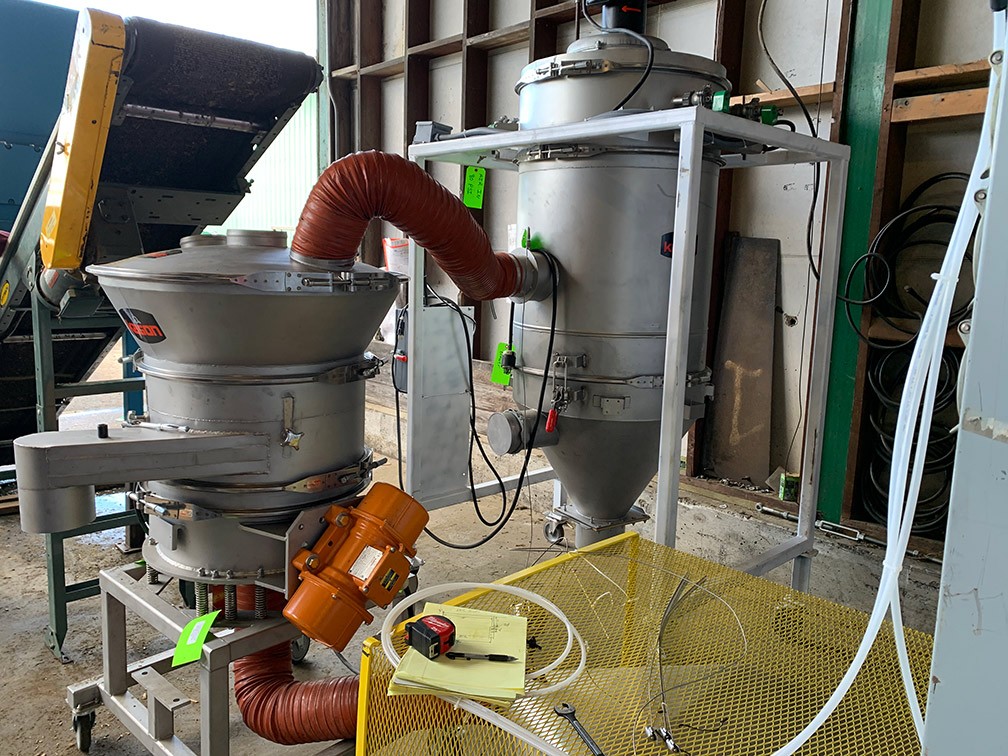 “It made sense to choose a solution that had been proven even if it was from a different industry. We figured that would be a good starting point that would get us 80% of the way there, and ABM was offering the customization and system integration that made us confident that we could bridge the gap. Kason is really a superior drying/processing equipment company, from my point of view. We quickly realized that coupling their technology with an experienced integrator and our front-line operator experience is exactly what it would take. Only because we merged those three disciplines, when we came up against different obstacles, were we able to test and modify the configuration until we got a solution that finally worked.”

“We were looking to lead the industry, develop something new that was more efficient, and not choke ourselves by making any big capital equipment mistakes,” said Toshoff.  The partnership with ABM and Kason enabled CHTC to realize lower start-up costs, with the ability to grow incrementally as volumes increased.

Reducing risk in the industry is essential, as the learning curve and the rapid fluctuations in the cannabis market can lead to changing requirements. With each harvest, the growers get savvier and the crops can change. The demands and developments in the medicinal and consumer markets can also impact the output requirements. With a more flexible modular system like the ABM-Kason approach, Tosheff said it’s easier to stay relevant and continually improve the process as the industry matures and progresses.

Columbia Hemp Trading Co. is a leading, vertically-integrated hemp marketplace providing both finished products and toll drying and extraction services. CHTC was envisioned by co-founder Billy Tosheff, previously a local vegetable and hemp farmer. Unlike other commercial entrants into the hemp industry, CHTC prioritized the most difficult segments of the supply chain, beginning with critical infrastructure available to stabilize the biomass. With an initial objective of supporting Oregon’s farmers, CHTC has established drying facilities in Corvallis and Molalla, OR, providing reliable channels for Oregon’s farmers to sell and process their crops and be assured of high-quality output. CHTC is committed to defining and improving upon best practices for the industrial hemp supply chain from genetics to bulk formulations, and everything in between. CHTC believes that supply chain control, quality, and transparency are the critical ingredients to bringing the benefits of hemp to the world.

Stay Up to Date With The Latest Updates & Progress

We never spam or share our contacts with outside entities.

We’ll let you know of any more of our advancements in hemp processing.

We post pictures from our testing plant and soon, from past jobs.