Almost anything can be a scale. 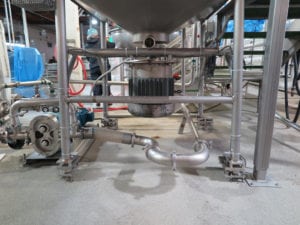 Naturally the heavier a load and the more it moves around, the more precision is sacrificed. But as technology improves, so does the range of equipment we can mount on load cells and proclaim Legal-For-Trade.
Many are familiar with placing static reservoirs on load cells (bin, hopper, & tank scales), but are surprised to learn the same can be done with equipment that doesn’t sit still. But with specialized cells and a few adjustments, even vibrating equipment with shifting loads can be continually and reliably weighed.

A Mixer Is One Of Those Things. 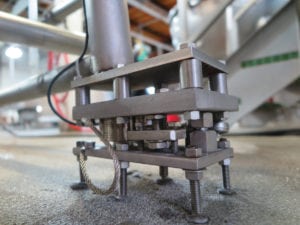 For example, one of our clients wanted to measure inputs by the weight of the mixer they were being poured into. Doing so would eliminate extra weighing steps while feeding and provide a safeguard in case a specialty batch went sideways (dumping everything out of a mixer to weigh it by the bucket isn’t exactly practical.)
They were skeptical at first because shifting loads and torsional forces are notorious for causing indicator drift. But with some new load cells from Minebea and a little trouble-shooting, we delivered a quality solution. We were pleased a week later to receive a call that they were “amazed” by the steadiness and accuracy of the solution.

Nearly every application in the processing industry is new in some ways, and old in others; you just never know what’s possible until you try. That’s why we encourage producers to come to us whether their problem is clearly defined or not. We love discovering, delivering, and sometimes creating possibilities.

Looking For Your Own Custom Solution?

We’re happy to go over your options, get you a quote, or point you in the right direction.
Get In Touch